Hamilton-Ryker® is a provider of Total Workforce Solutions for industrial, administrative, and information technology staffing, and recruitment. We are headquartered in Tennessee with thirty-five locations across the U.S.

Since 1971, we have constantly and continuously worked to discover new and better ways to bring comprehensive services to employers and rewarding jobs to skilled professionals.

We’re the people you need when you need…

In 1971, two friends came together to create a business. One was a farmer, the other a life insurance salesman. They had seen staffing firms in St. Louis and Memphis, but no one was offering these services in the small towns of West Tennessee.

Wayne and Crawford believed that relationships are the key to business success, and since day one customer relationships have been at heart of what we do.

We’re one of the largest employee-owned staffing organization in the country.

Over the years, we have grown to become one of the largest independently owned staffing firms in the United States.

We are an Inavero Best of Staffing award winner, and we have received the Safety Standard of Excellence awarded by the American Staffing Association and the National Safety Council.

And since becoming employee owned in 2012, we have more than doubled in size and greatly expanded our technology, consulting, and talent management services. 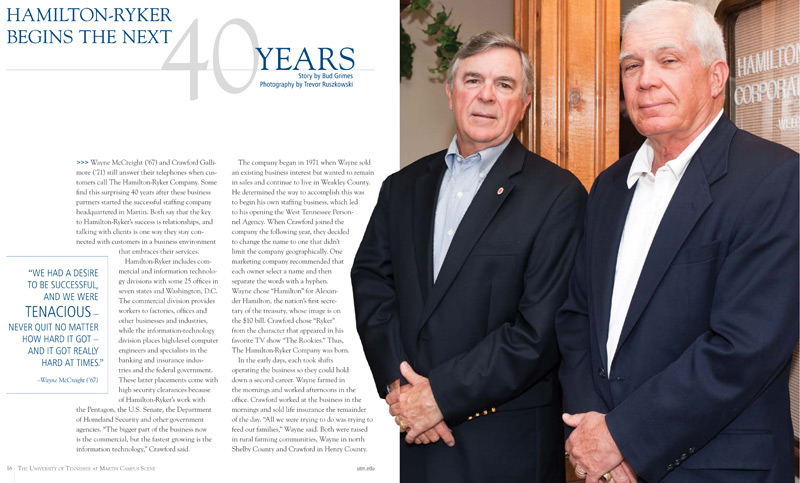 Find out what a difference Total Workforce Solutions can mean for your business.

Looking for a new opportunity?

We’re here when you need us.

Do You Have a Workforce Development Plan for 2021?

Workforce development is more important now than ever. By having a robust plan in place, you can ensure your employees and candidates have critical skills that allow them to thrive in your [...]

What Are Workforce Development Solutions?

A business can have a strong brand, great product, and unique space in the marketplace, but it’s not going to be successful without a productive workforce. Your employees are what makes your [...]

Why Should You Partner With Hamilton-Ryker in the New Year?

As the new year approaches, many companies begin to examine their current strategies, looking for a better way. This is especially true when it comes to workforce management. At Hamilton-Ryker, [...]

Why You Should Provide Soft Skills Training for Employees

Great employees are often a lot more than just great workers. The environment around a place of business depends on the attitudes and interactions between members of the workforce. A great [...]